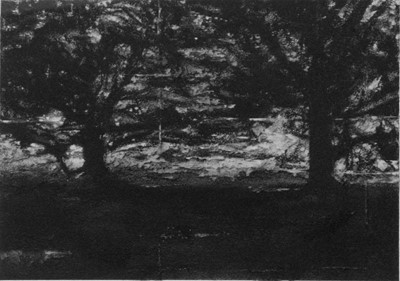 "In my work I aim to portray elements of the sublime, the unfixed and the hidden in nature. I am interested in exploring traditional Romantic and Classical landscape concepts such as the search for an Idyll, escapism, and the desire to seek comfort in the sublime."

"I create illusionary, psychological spaces inspired by my encounters with nature- for contemplation, meditation and to ultimately transport the viewer to another time or place. I am interested in creating similar effects in my work, that directly experiencing the landscape and nature has on the human psyche. I use a variety of media to help explore the boundaries between the abstract and the representational and also to challenge the viewers’ perception of ‘traditional’ landscape."

2001 Travelling Scholarship to Andalucia, awarded by the Princes Trust, the Princes Drawing School, sponsored by Windsor and Newton and Porcelanosa.