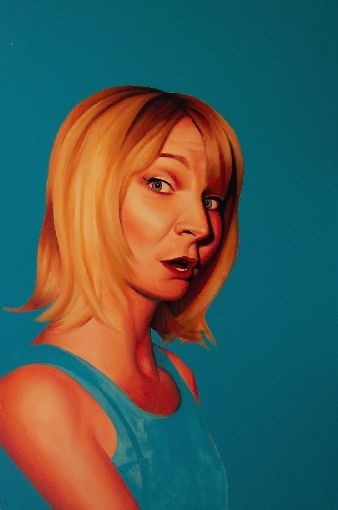 "The paintings are of people I come to know. I draw, photograph and study these people, and later I form compositions from the images I have collected. The details and poses that I choose are what I feel are the most clean, pure and proud. I would like to find something strong or even monumental in the model's appearance. I search for this neat smooth quality for the painting.

It is important that my relationship with them is not entirely comfortable; this gives the pictures their tension from outside the frame. Their pose is made with full knowledge of the complexity of appearance and representation. Their self-consciousness shows them to be contemporary people. They are not naive. The people I choose are wary of their self image, and it can make them appear awkward, but it also gives them a kind of power inside their own portrait."

Three month residency, with one contact day a week, in Dumbiedykes housing scheme Holyrood, Edinburgh. Collaborating with residents to produce contemporary art for an exhibition.

2002 Scottish Arts Council Assisstance grant Towards preparation for a solo show at the Collective Gallery, Edinburgh

2002 Professional Development Grant Towards a visit and exhibition at RMIT University, Melbourne

The Strange Physiognomy of the Face