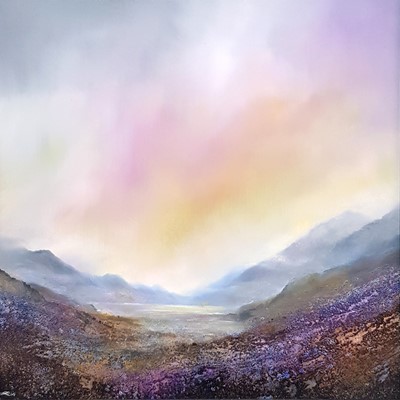 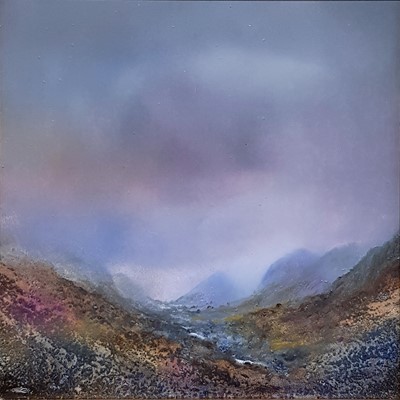 Born in Nottingham, Peter studied art firstly at Nottingham College of Art and then at Leeds Polytechnic Faculty of Art and Design. After leaving college Peter lived and worked on the Isle of Skye and later Edinburgh where he exhibited his work widely. On moving back to Nottinghamshire, Peter was employed by Nottinghamshire County Council helping to establish Rufford Craft Centre as a centre of excellence for the applied arts. Over twenty five years later, Peter retired from his role at Rufford, has begun to put together a new body of work based on his interest in the landscape and his regular visits to the Isle of Skye, the North Yorkshire Moors, Derbyshire and the Lake District.

‘I have always had an interest in the landscape, especially dramatic landscapes, those that have an underlying threat to human settlement. Where the line of the hills gets lost in a leaden, storm ridden sky and a glimpse of sunshine on the horizon promises a brief interlude to the wind and rain of a passing storm. It is these glimpses that I attempt to capture, the moment in time when the light creates an ephemeral landscape, a landscape in transition that a moment later would have changed completely. The Lakes, the Moors and the Isle of Skye have all of the landscape characteristics that I look for. They provide the backdrop to this changing drama of light and shade that I attempt to capture. The paintings, in oils, reflect the colour and tone that the weather brings to the landscape and the seasonal changes in mood and light. The paintings comprise of various layers of paint, the depth of tone and variation in texture being dependent upon the thickness of application. Other materials are used to create the textured surfaces that both contrast and compliment the areas created using more traditional painting techniques.’